The doorway of this church is late Norman and the tower of Transitional character. It is possible that the nave and tower were built together, or that the tower is slightly later. 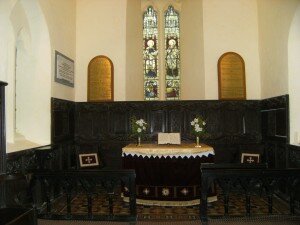 may also date from the latter half of the 12th century, but there is no detail of that period. All the windows are Decorated and consist of two lights with cusps but no tracery. There is some remarkable panelling round the chancel: it is not mediaeval neither is it Victorian, but the style is more or less Gothic and probably dates from the 17th century, as also the communion table, which bears the initials T.H. The tablet of commandments has the date 1676. The chief monument in the church is to the memory of Edward Mitton, who died in 1683.

The roofs of chancel and nave are hidden by ceilings. The chancel arch is of unknown date as are the two windows on either side of the nave. There is a blocked doorway in the north wall and some remains of what was probably a square-headed window.

The south wall is more interesting. A buttress of the usual Norman form is built up against it, to the east of the doorway, which is the most striking thing in the church. There is a plain tympanum over which is a bold roll moulding forming a semi-circular arch. This is supported by shafts which have scalloped capitals, with the cable moulding for the necks. The bases are slightly different from one other: the western one is quite Norman, but that on the east has a bold round of a slightly later type. As before stated, the whole character is almost Transitional. The door itself has some good ironwork, dated 1679. The simple porch bears the inscription, “this porch was built by John Hill Gent & Ursula his widow 1662.”

The western tower is slightly to the north of the centre of the nave and the west window is not exactly aligned with the tower. This is of Norman form and splayed inside. The outer part has been renewed. The tower arch is pointed and once recessed. The ornaments on the capitals consist of stars and foliage of a Transitional type. The battlement of the tower is modern.

The font is circular and plain: it probably dates from the 12th century.

The parish register dates from 1716 and the marriage register from 1837.

Praise the Lord. Blessed are those who fear the Lord, who find great delight in his commands.
Psalms 112:1